There can be no place on earth where the word drought has more dreadful resonance.
In Ethiopia in 1984, a famine of famously "Biblical proportions" claimed hundreds of thousands of lives. 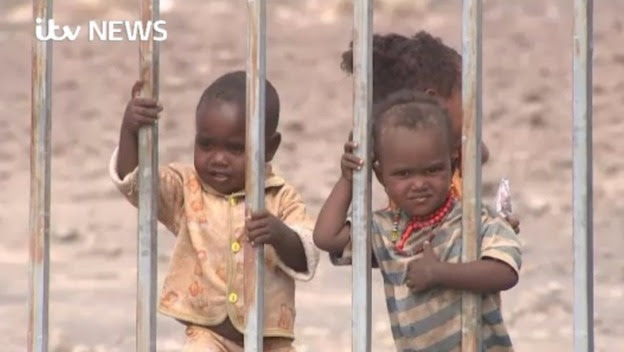 Play video
"The real question is do we have to see children dying like we did 30 years ago, or can we stop it happening again," John Graham, country director for Save the Children, told me.
Read more: Ethiopia is in the grip of its worst drought in decades
Back then, John was a young aid worker helping to organise food supplies into the country torn apart by civil war.

In the three decades since, Ethiopia has changed beyond recognition.
Double-digit growth has brought roads, schools and clinics.
So why, 30 years on, is there this desperate fight to stop history repeating?

The answers are complex and the subject of much debate.
Then, a government that tried to cover up the crisis and aid agencies slow to respond took the blame.
This time, in contrast, the Ethiopian government has committed $380 million (£270 million) to combat the crisis.

But it is simply overwhelmed by the scale of the drought.
Some believe that pride and a determination to present the country as a success has again meant the appeal for international help was slow coming.
But perhaps the biggest change since 1984 is that the population is now approaching 100 million people, more than double that of 30 years ago.

Of course, in part, that is testimony to the success of the aid industry. But it is also a failure. There are many more hungry mouths to feed.
Ethiopia, even in good times, has been the biggest African recipient of aid, pointing to slow progress to breaking the dependency on outside help.

But John Graham rejects criticism of the aid programmes.

We are working on development projects, schemes to stop this happening again. But these are problems that don't go away overnight or even a decade.
Every time there is a drought, we ask how can we do things better. And I think we are doing things better.

– SAVE THE CHILDREN COUNTRY DIRECTOR JOHN GRAHAM
Still for now Ethiopia is sending out another SOS to a world distracted by many other crises and hoping once again the world will respond.
Last updated Fri 8 Apr 2016
Posted by Guihon at 2:39 AM