Ethiopia: drought and prosperity side by side - World - CBC News

Country's economic growth is widening the divide between rich and poor 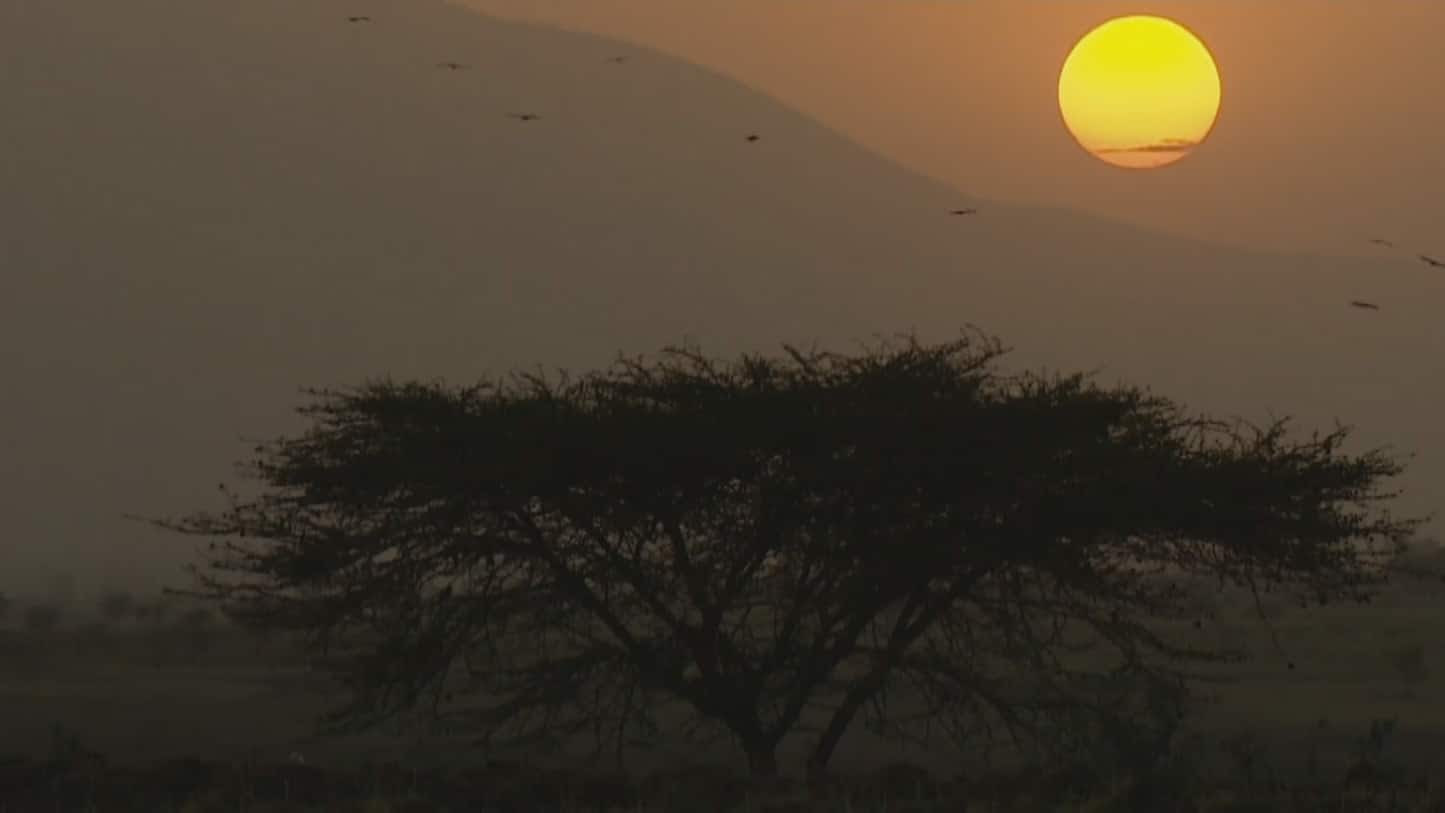 Europe correspondent
Margaret Evans is a foreign correspondent based in the CBC’s London bureau. A veteran conflict reporter, Evans has covered civil wars and strife in Angola, Chad and Sudan, as well as the myriad battlefields of the Middle East.

Like most places in the world, Ethiopia can be a country of contrasts and contradictions. Here, they're just a little more complex than most. You have to be good at reading between the lines.
I met my first in Addis Ababa in the form of a club full of couples, swirling around the dance floor to a salsa version of Dolly Parton's Jolene.
This was the much talked about "emerging middle class" of Addis. Or maybe the upper-middle.
"I love the whole growth and the process," a 33-year-old woman named Lily Yohannes told me. "It's in an amazing, innovative state right now, so I'm part of it, hopefully." 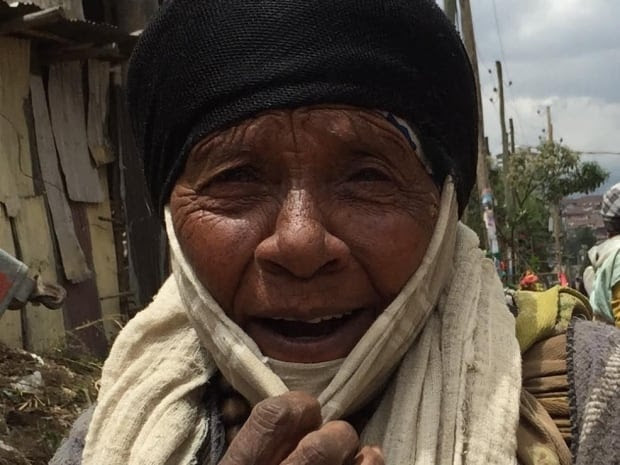 A woman who sorts through garbage for a living is seen on the streets of Addis Ababa. The World Bank reports a 33% reduction in the share of the Ethiopian population living in poverty over the past 15 years, but the country remains one of Africa's poorest. (Margaret Evans/CBC)
Yohannes moved back to Addis recently after living in Dubai for a number of years — drawn, she says, by the buzz.  She and her sister run a fashion label. She teaches salsa on the side.
"In Ethiopia I think there is that average class that is being established as we speak right now," she says. "You know there are people coming up in life and they're not necessarily the richest, but the average class is being built up, so that's a good sign for me."
The main bus depot is a ballet of constant activity as porters climb up onto the rooftops of buses loaded down with sacks of food, boxes and suitcases, lowering them down on ropes or onto the shoulders of other porters while newly arrived hopefuls in the city wait patiently for their belongings. 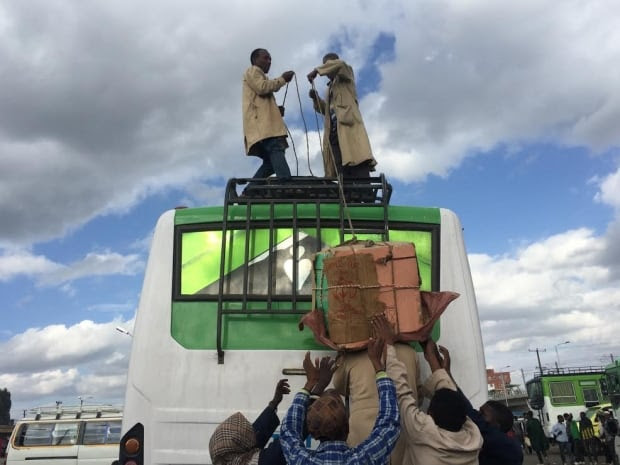 Porters unload passengers' belongings and sacks of food from a bus at the main depot in Addis Ababa. The Ethiopian capital is undergoing an enormous growth spurt, with foreign investment fuelling construction and more people moving to the city in search of work and to escape drought. (Margaret Evans/CBC)
The government's stated goal is to become a "middle-income" nation by 2025, and much has been made of the country's economic growth in recent years, nearly 10 per cent annually over the past decade. Investment from China has also helped transform the face of Addis Ababa.
Along with some of the country's well known "pro-poor" policies, the transformation has turned Ethiopia into a bit of a star in the eyes of western governments including the United States and Canada.
They look at some of Ethiopia's neighbours — Sudan, Somalia, South Sudan, Eritrea — and congratulate each other on their good relations with a country they call an "island of stability" in the region.

But Ethiopia's human rights record is abysmal and perhaps all the more dangerous because it's not always overt. The violent crackdown by government forces on protesters in Oromia last year has been well evidenced by human rights groups. As many as 200 people were killed, according to witnesses. The government has promised an inquiry.
Just as worrying is the reluctance — and in some cases outright fear — ordinary people have when it comes to criticizing the government.
One of Lily's dance partners was happy to talk about life in Addis, his feelings about the divide between the rich and the poor and between rural and urban Ethiopians.
"The contrast is crazy, but even without the drought there is the contrast between the lifestyles of the people inside the cities and outside the cities," he said.
Ask him about politics and things become very vague. "I try not to engage in politics most of the time,"  he explained, "but we hear about it."
When I asked him specifically about the Oromia protests, sparked by government appropriation of land near Addis, his answer is this: "I don't know exactly what's going on, if that can be an answer. I hope you get me."
"I don't know what's going on" has become code for criticism of the government in Addis. In other words: I don't know because the government isn't telling me.

Controlling the message is an art form for the Ethiopian government, even when it comes to framing the narrative around foreign aid in the midst of the current drought.
It's not possible to travel as a journalist in Ethiopia without government permissions. If you don't have them, ordinary citizens will demand them from you. And you are usually assigned a government minder.
Local officials assigned to accompany us on our recent trip were reluctant to allow us to see any real signs of suffering in the face of the drought.
That's a reflection, in part, of a proud culture unhappy with the notion of anyone thinking Ethiopia is not willing or able to care for its own.
But it's also about control.
"There appears to be a tendency by some in the international humanitarian system to change the message in such a way that what the rest of the world hears from Ethiopia is a shrill cry of an SOS for immediate intervention," the government's communications minister, Getachew Reda, said in an interview. 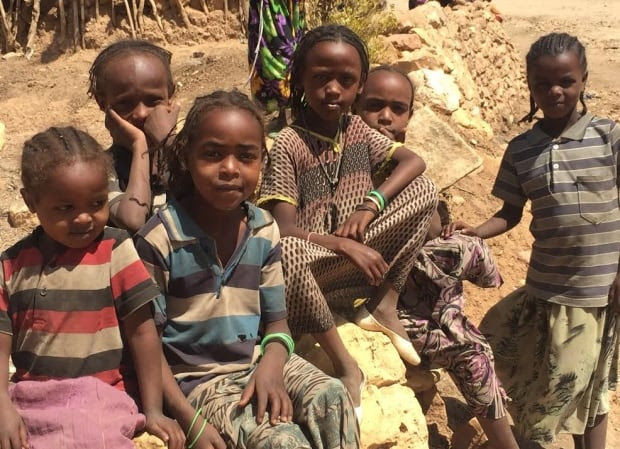 Despite the vast construction underway in Addis Ababa, the vast majority of Ethiopians depend on rain-fed agriculture to survive. (Margaret Evans/CBC)
The government's interest in controlling its own media is much more problematic than just prying into what foreign reporters are saying about the drought. Human Rights Watch calls Ethiopia "one of the leading jailers of journalists on the continent."
That, of course, contributes to an underlying climate of fear.
When I asked Lily's salsa partner about it he said: "TIA — This is Africa. We're slowly progressing to ... whatever we're progressing to. I would not say we're free or we're not free because I'm not political and I don't' know exactly what goes on."
And the band played on.
Posted by Guihon at 3:15 AM