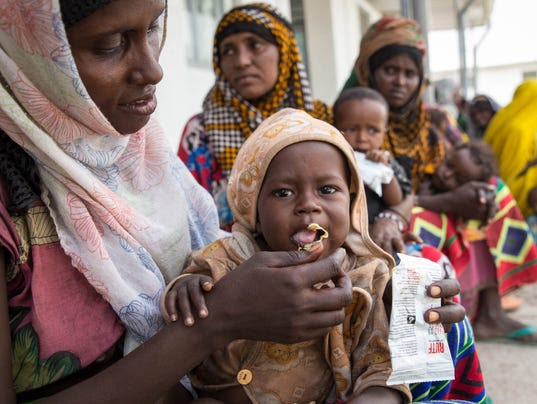 (Photo: Mulugeta Ayene, AP)
FENTALE,  — Sitting in the blistering sun as she cradles her 2-month-old baby, Genet Tamisat is one of hundreds of mothers waiting to have their children checked for malnutrition, as Ethiopia faces its worst drought in decades.
“I have nothing to eat at home. I can’t even buy maize by myself,” said Tamisat, who also has a 4-year-old son. “People can look at us and think we’re OK, but we are in great danger. We have nothing.”
Despite the crisis confronting Tamisat and millions of other Ethiopians lacking food and drinking water, a world caught up in strife is paying insufficient attention to their plight, because it is distracted by other urgent needs.
The government and the  are trying to raise $1.4 billion to feed 10.2 million Ethiopians, but only half has come through so far, as the wars in  and plus the migrant crisis dominate the news.
“ for this response has been very slow," said Chege Ngugi, national director of the charity ChildFund Ethiopia. "My priority is to support the efforts of the government of Ethiopia to save lives, but we’re not reaching everybody.”
A strong El Nino has blocked two consecutive rainy seasons that normally nourish crops that feed 85% of the country. The drought has forced the government to find additional food aid from the United States and other donors.
The  dispatched an response team to Ethiopia to provide emergency assistance that includes nearly $4 million in corn and wheat seeds for more than 200,000 families. 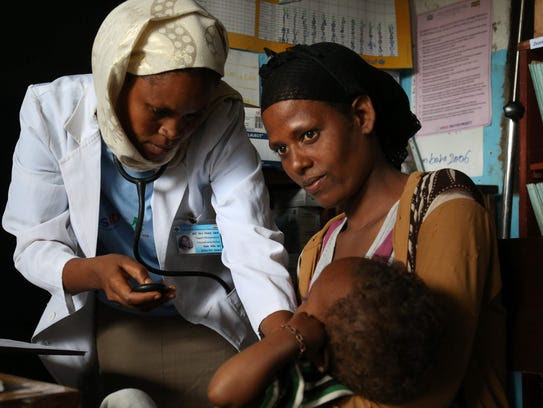 Here in the , which includes central Ethiopia, the land is arid as far as the eye can see.  — some fresh, some old — are scattered across patches of dusty earth. 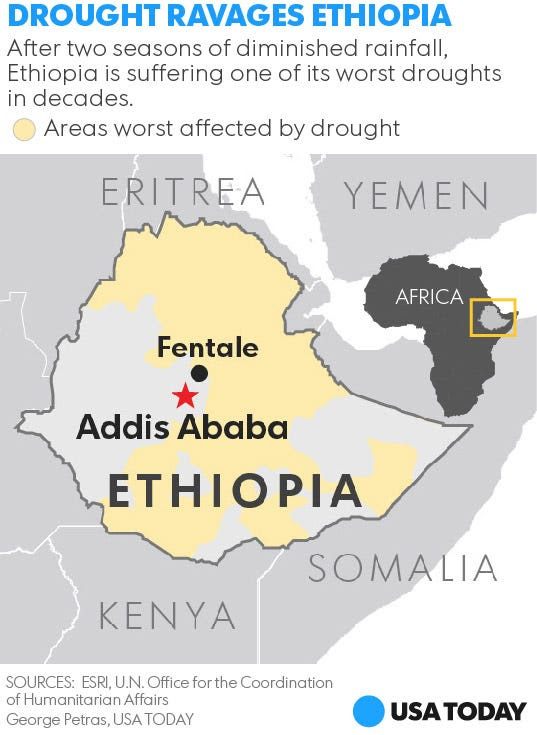 Humanitarian needs in this  country have tripled since the start of 2015 as the situation deteriorates.
Malnutrition rates in the worst-affected areas have surpassed 20% — higher than the’s emergency threshold of 15%, said Challiss McDonough, regional spokeswoman for the U.N.'s .
This year, the food program will help more than 2 million children, pregnant women and breast-feeding mothers suffering from moderate acute malnutrition.
The U.N.’s children’s fund, , estimates that almost 500,000 children need treatment for severe acute malnutrition.
“Even with interventions, the situation is getting worse,” said Eyoel Lemma, who works at ChildFund Ethiopia in .
He said ChildFund, with help from the U.N., also provides supplementary food and malnutrition treatment to children under age 5. But that becomes a major difficulty as families migrate to different areas looking for water and pasture for their livestock, as well as to find jobs. 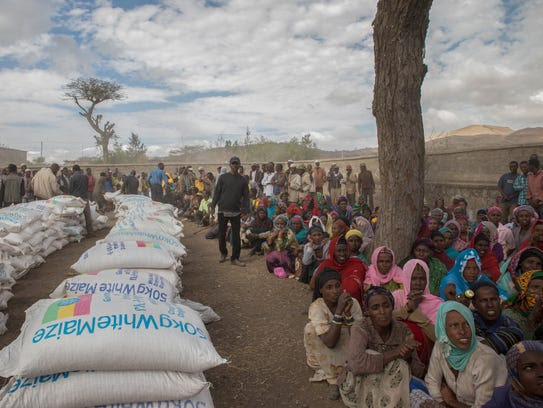 Residents of the Ziway Dugda district of Ethiopia wait for food at the Ogolcha food center. (Photo: Mulugeta Ayene, AP)

As a result, many people miss out on the food rationing programs.
One woman on the move is Haso Bultum, 27. After hours of walking in the sun across barren mountains, she reached a rural health care facility here in Fentale with her malnourished 9-month-old twins.
“It’s very hard. I’ve had no sleep, because we’re trying to find some food for our cattle,” she said. “To save ourselves we’re constantly moving.”
While Ethiopia has the fastest growing economy in the world and has lifted millions of citizens out of poverty, the reality is that 80% of Ethiopians are still dependent on agriculture. 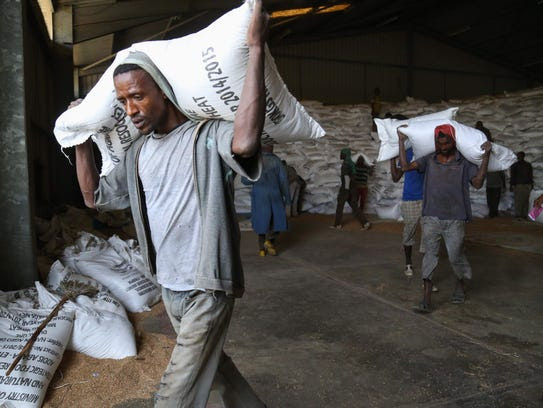 McDonough from the World Fund Programme warned that her organization could run out of food within two months.
“We have been calling for urgent funding for months now, and still have only about a quarter of the resources that we need for the next six months. Unless we receive significant new funding very soon, we could start running out of food for relief assistance by May,” McDonough said.
Samuel Ferfu, manager of the Children’s and Family  in Fentale, said another major issue is the lack of access to water. Almost 6 million people need emergency water, according to UNICEF.
“There’s no water at all — the river is dry,” he said. “No water makes sanitation impossible, and as a result, the prevalence of disease will increase.”
For the time being, Ethiopians are praying that rain will reach the worst-affected areas, but flooding is a serious risk after a lengthy drought.
“Soon the rain will come, and people’s worries will be flooding. But they have nothing except their homes to lose. They’ve already lost all their animals and crops,” said Lemma from ChildFund Ethiopia.
For Tamisat, 27, and her young children, talk of rain in the coming months is a false hope.
“We have no water and no food," she said, wiping sweat off her forehead. "I don’t know what is coming for the future, but I have no hope about the rain.” 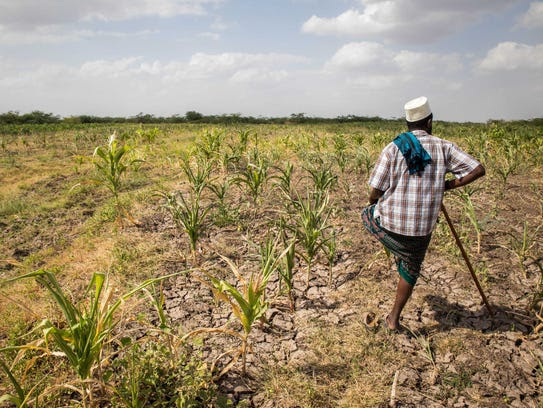 Hamed Dawud, deputy administrator of the Megenta area of Ethiopia inspects failed crops in the Afar region. The crops have failed and farm animals have been dying amid severe drought that has left Ethiopia appealing for international help to feed its people.  (Photo: Mulugeta Ayene, AP)
Posted by Guihon at 2:21 AM