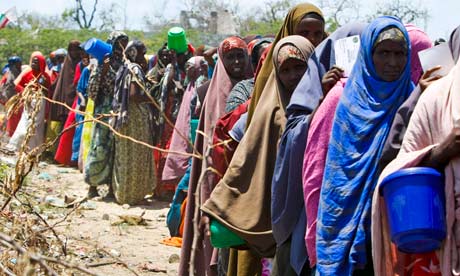 When it comes to natural disasters, and their very unnatural impact on poor people, prevention is better than cure. Yet this lesson seems incredibly hard to turn into practice. However good the early warning system in the run-up to disasters like the current crisis in east Africa, themoney to head off future suffering often doesn't start flowing until images of human pain hit the TV screens.

This is all the more frustrating because, as argued in a new paper by Oxfam's humanitarian policy adviser, Debbie Hillier, we know far more than we used to about how to do this preventive work (known in development jargon as disaster risk reduction, or DRR) and how much more cost effective it is than reacting after disaster has struck. While it is too simplistic to give an overarching cost benefit ratio (often quoted as 1:4 or 1:7), studies have shown time and again that good prevention saves lives and money. Protecting livestock is much cheaper than starting afresh once they have been decimated by drought: in the Afar region of Ethiopia, the restocking of sheep and goats is 6.5 times more expensive than supplementary feeding, while restocking cattle costs 14 times more. According to the International Federation of Red Cross, it costs around £3.50 a person annually to build up resilience, compared to £150 a person for relief assistance for just three or four months.

DRR also ensures aid and government investments remain effective. All aid - whether humanitarian, development, recovery or reconstruction - should be resilient to disasters. Otherwise, hospitals, schools, roads and water points (as well as livelihoods) can be damaged or washed away when a natural hazard strikes. Between 1997 and 2007, Ethiopia lost on average $1.1bn to drought every year. This almost eclipsed the $1.3bn in international assistance spent annually over the same period to tackle poverty and emergencies, and exceeded the amount Ethiopia invested in agriculture, a sector clearly crucial to ending food shortages.

So how can the current emergency response in east Africa reduce risk?

In Ethiopia, some communities that received emergency aid in previous droughts no longer require it; this is thanks to DRR. In the Liban district of Guji zone, a small-scale irrigation project pumped water from a major river, enabling pastoralist households to produce grain both for their own consumption and to sell at local markets. Women report that they no longer worry about their children and families experiencing milk and food shortages. In contrast to last year, and neighbours outside the scheme, the community no longer needs food aid and livestock have not migrated, because there is enough crop residue for them to eat.

Where cash- or food-for-work programmes are being implemented, the public works should boost DRR by focusing on vital communal assets, for instance improving rangelands or water harvesting.

Where markets are working, providing support to traders to bring in essential food and strengthen delivery networks is essential, complementing cash-for-work schemes. Part of Oxfam's work in the current crisis has involved persuading traders to return to the worst-hit areas to get markets functioning again.

Emergency responses should support mobility where possible, for example by providing mobile services such as healthcare or drinking water provision, and thereby promoting the sustainability of pastoralist livelihoods. A conflict-sensitive approach may also be required to ensure responses reach all vulnerable sections of the community and are negotiated with traditional leaders and across clans.

Vaccination and other animal health interventions are important to prevent death and disease in the herd and strengthen livestock resistance to drought. Humanitarian response should use and strengthen the private sector in developing long-term, sustainable veterinary services.

Emergency interventions should work with and strengthen local organisations and community leaders, who are best placed to identify the most vulnerable and deliver aid where it is needed.

Rains are expected from this month, and with them comes a significant risk of flash floods and disease. It is vital to undertake contingency planning for public health and veterinary services alongside the pre-positioning of essential supplies. This will help to prevent outbreaks of water-borne disease among people, and vector-borne diseases in animals.

But DRR is not just about overhauling responses to emergency. In east Africa, recovery plans must stretch to late 2012 and beyond. More fundamentally, the way we do long-term development work must also change. Looking at recent history, it is clear that any three to five-year rural development programme in east Africa will be subject to at least one drought. Yet drought is too often treated as an external factor, an exogenous shock that sits in the risks column of the programme proposal. It typically takes six months to get approval for a change to a EuropeAid proposal, so it is almost impossible to reallocate development funding once committed. Instead, drought should be incorporated into the programme design from the outset, allowing sufficient flexibility to change plans when it hits. So, for example, if a programme involves training teachers, it should also assess whether the school has sufficient water supplies or could provide extra school meals during the hunger season or drought.

The arguments for more substantial investment are persuasive, but contrast with dismal global DRR expenditure of just $835m in 2009, a mere 0.5% of total official aid. Spending in those countries now afflicted by drought and hunger shows similar patterns. A helpful first step would be to make humanitarian funding more long-term and flexible; it often has to be spent within 12 months. We know what to do, so let's start doing it