The east African country and its disputed territories have been locked in a bloody civil war for 20 years, costing more than 400,000 lives.

With no central government, and southern Somalia – at the centre of the famine – ruled by a brutal al-Qaeda-linked militia, the immediate and future prospects for its people look bleak. 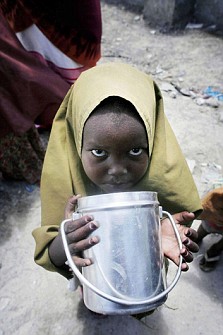 Time for change: Drought and famine in Somalia (Picture: AFP/Getty)

‘The famine has been worsened and deepened by the political problems in the region,’

says David Anderson, professor of African politics at Oxford University. ‘This undoubtedly makes the work of the humanitarian and relief agencies much harder. However, the famine, dreadful as it is, might help to focus the minds of Somali leaders on the need for a political solution.’

Prof Anderson believes the famine is down to human inaction. ‘Getting sufficient food to any location at a price people can afford is a matter of economic planning and political policy,’ he says.

‘But the heart of this famine lies in southern Somalia, an area that has no government, which presents a threat to neighbouring governments in Kenya and Ethiopia. They face greater difficulties and some political dilemmas in judging how best to deal with the situation.’

Somalia has been without a government since 1991 and, even before the current drought and famine, some 1.2million southern Somalis have migrated across the Kenyan border. These numbers have swelled with refugees fleeing the current crisis.

‘The southern regions of Somalia are dominated, though not fully controlled, by the loose federation of militias known as al-Shabaab,’ says Prof Anderson. ‘This group has pledged to remove foreigners from Somali soil and has a strong anti-Western agenda.

‘Al-Shabaab is also said to have links to al-Qaeda and is known to have a small number of fighters from elsewhere in the Islamic world in its ranks.

‘The control of al-Shabaab is the most pressing political problem in southern Somalia and is a major impediment to administering humanitarian relief.’ Al-Shabaab was once considered a force for good by helping to maintain law and order in the war-ravaged capital, Mogadishu, but a US-sponsored Ethiopian invasion caused the group to flee to the south where, Prof Anderson says, it grew into a more radical and less predictable movement.

‘Western interventions have been well meaning but too often ill-informed and poorly executed,’ he says. ‘The US-sponsored Ethiopian invasion only worsened things; the Ethiopian presence giving radical groups a reason to gather support against foreign intervention.

‘This strengthened al-Shabaab hugely and weakened the position of politicians, who the West hoped would rebuild political authority and re-establish the state. We are presently further from this outcome than ever.

‘There is anxiety that southern Somalia might become an alternative base for radical anti-American politics. Al-Shabaab’s success in mounting attacks in both Kenya and Uganda shows the movement is a serious threat.’

But al-Shabaab is actually suffering a loss of support as a result of the drought and famine. Prof Anderson adds: ‘Armies fight on full stomachs, and in famine, recruits flee, discipline crumbles and it becomes impossible to replenish supplies.’

Most are fleeing to Dadaab in Kenya, location of the world’s largest refugee camp. Despite being built to accommodate 90,000 people, numbers are expected to swell to 450,000 by the end of the year.

Since the 1990s, millions have passed through the camp, unable to return home but unwelcome in Kenya.

‘Over the past decade, this has become one of the most critical and serious refugee problems anywhere in the world and the present drought and famine have only served to greatly worsen this position,’ says Prof Anderson.

Somali leaders recently held fresh talks to restore stability to the region but Prof Anderson is sceptical. ‘The real problems cannot be solved,’ he says.

‘The famine lies in an area where humanitarian agencies cannot operate because of the security threats and where al-Shabaab and other local militias are not capable of assisting the local populations.

‘To get food aid into these areas and prevent people from moving is the solution that is required but it is not achievable unless southern Somalia can be secured militarily.’

Prof Anderson says Somalia has been a failed state for 20 years and its instability has an adverse impact on the entire region.

‘The present famine is seen as a security threat as well as a humanitarian crisis,’ he explains. ‘I do not believe that Somalia will ever be a single country again.

‘The sooner we accept that, and begin to work toward creating three or four new states to replace the old one, the quicker security and stability can be restored.’