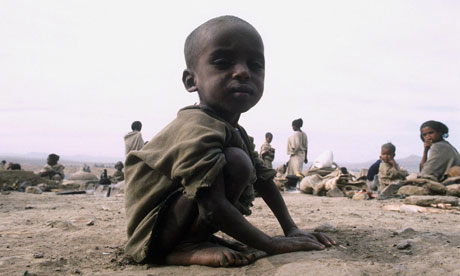 A hungry child in Ethiopia in 1985. Photograph: Rex Features

Witnessing famine comes as a visceral shock – the slow and silent evisceration of society, family and the human body itself. The Russian sociologist Pitrim Sorokin, survivor of the famine of the early 1920s in his home country, wrote in Man and Society in Calamity (1946) of starvation reducing man to "a naked animal upon the naked earth".

His experience was of a communist famine, in which professors starved alongside peasants. More common is famine that singles out the poor. The economist and philosopher Amartya Sen, who lived through the 1943 Bengal famine as a young member of a prominent family that fed the destitute, opened his seminal bookPoverty and Famines (1981) with the observation that famine is the phenomenon of some people not having enough food to eat, not of there not being enough food to eat.

Thomas Keneally, the Australian novelist, writes vividly about the depths to which human beings descend during famines. His examples are Ireland, Bengal and Ethiopia, and there are similarities among the three. Keneally draws on scholarship and archives, and also witnessed at first hand the civil war and famine in Ethiopia and Eritrea in the 1980s, when he travelled with the rebels and saw the destruction inflicted by the then military ruler of Ethiopia, Mengistu Haile Mariam, who persistently sought to starve the civilian population of the rebel-held areas into submission.

The book is both reportage of starvation and analysis of how famine is made. The "politics" in his subtitle points to the fact that drought, blight and pestilence may be unavoidable but famine is a manmade phenomenon. This may be an elementary point, but it needs to be made time and again.

One of Keneally's most intriguing passages is his description of Charles Trevelyan, assistant secretary to the treasury in Whitehall in the 1840s. The Irish revile Trevelyan as the instigator of cruelly minimal relief efforts during the famine. An evangelical Christian, virtuous in his personal life, he was convinced that certain events were inevitable and of divine intent, though he admitted that it was "hard upon the poor people that they should be deprived of knowing that they are suffering from an affliction of God's providence". Trevelyan didn't visit Ireland during the famine but derived his policies from John Stuart Mill's laissez-faire principles of political economy and Thomas Malthus's view that famine was a necessary corrective to overpopulation.

Keneally writes: "The religiously devout Trevelyan considered murder a great wrong. It is sobering, then, to think that the deployment of convinced, virtuous intent … and an intense belief in a providential deity, could be almost as destructive as the malignity of a dictator such as Mengistu Haile Mariam."

In the case of Bengal, Winston Churchill shoulders much responsibility. As the Japanese were poised to invade India in 1942, he ordered the destruction of much of the Bengal fishing fleet and the stockpiling of food for the army, and was notably indifferent to the need for relief. The famine caused the largest loss of life on the British side during the second world war.

Independent India has not suffered great famines, and Sen has speculated that the real force for eliminating famine is the development of liberal democracy. Keneally is sympathetic, noting the suppression of democratic aspirations in all his three cases. Today's famine in Somaliacan certainly be attributed to the collapse of government and the absence of democracy.

Students of famine necessarily focus their attention on the bad news story, where starvation recurs. It is easy to overlook the 100-year trend, which is the elimination of famine from western Europe and its near complete banishment from Asia. Of the twenty 20 biggest famines of the 20th century, in terms of loss of life, just one (Ethiopia 1983-85) occurred in Africa. The other 19 were Asian and east European. The worst was China in 1958-61, the most recent that killed more than a million was North Korea in the 1990s.

Two huge factors in reducing killer famines are Asian economic growth and improvements in public service technology and infrastructure. Better transport for food and primary health care have minimised the biggest killers during famines, which were epidemic diseases. However, famines still persist in an era of globalisation. Most now occur in Africa, kill far fewer people, and are often associated with intractable civil wars.

Keneally makes passing mention of famines in Russia, China, North Korea and contemporary Ethiopia, accusing the Ethiopian prime minister Meles Zenawi of being as much to blame as his predecessor. Notwithstanding the ugliness of Ethiopia's military operations against Somali opposition groups, surely Keneally is making an error here. Extreme poverty in Ethiopia is not the product of Stalinist policy but of the globalisation trap.

With its existing economic infrastructure and human capital, Ethiopia, like most African countries, simply cannot compete in a global market, but has been told by international economic orthodoxy to pursue policies aimed at doing exactly this. Although the heyday of doctrinaire structural adjustment and downsizing of the state has passed, western nations still preach the fundamentals of a single path to development, through integration into the global market. Is not the ghost of Trevelyan stalking Africa?

Alex de Waal is the author of Famine Crimes.