Panellists at a Red Cross event have admitted that, despite timely warnings, the response to the drought was ineffective 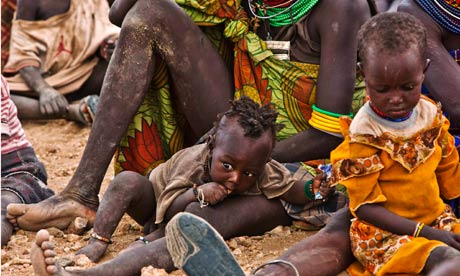 Almost four months into the Horn of Africa crisis, aid agencies are involved in much soul-searching as to whether they could have responded more quickly to the drought and famine.

David Peppiatt, head of humanitarian policy at the British Red Cross, acknowledged the almost unbridgeable gap between getting out a simple message in order to raise funds quickly and trying to explain the complexities behind food insecurity. In a bleak assessment of the latest humanitarian disaster, he said: "The early warning system was very effective, but the drought response was not adequate."

His comment was made at the Commonwealth club, where he was part of a panel discussing whether famine could have been avoided. In response to a pointed question about whether the British Red Cross had done anything significantly different this time compared to past crises, Peppiatt acknowledged that it hadn't.

Peppiatt did say, however, that the crisis had put the spotlight on food insecurity, the need to promote resilience and, especially, the need to invest in agriculture and particularly small farmers, who produce 90% of Africa's food. Mike Wooldridge, the BBC's veteran world affairs correspondent, who has covered past famines, said he could not agree more on the importance of agriculture.

"There has never been a greater time of opportunity for agriculture," said Wooldridge, although he questioned whether pastoralism could survive as a way of life with climate change and after this latest crisis.

Given the importance of the relationship between the media and the aid agencies in such events - relief groups rely on the media as a platform for their appeal, to put it bluntly, and the media rely on the agencies for access to camps and refugees - Woolridge emphasised the importance of first-hand reporting. He pinpointed an interview with Valerie Amos, the UN's head of humanitarian affairs, on the BBC programme The World This Weekend on 3 July, for galvanising media interest in the story.

That still leaves the question as to why it took until then for the world to wake up to the scale of the emergency. After all, relief agencies such as the UN's World Food Programme (WFP) had been sounding the alarm since November 2010. In fact, Caroline Hurford, head of the WFP's liaison office in London, pointed out that her boss, Josette Sheeran - no slouch as a communicator - had been in Mogadishu, Somalia, with media in tow, in April, to draw attention to the impending emergency.

Amid all the soul-searching, a member of the audience wondered about the role of regional governments in sounding the alarm. It was a pertinent reminder of the African Union's woefully slow response. Even when the African Union did manage to hold a summit meeting in Addis, Ethiopia,few heads of state bothered to turn up.

As for the politics of the famine, with al-Shabaab banning most western aid agencies from the afflicted areas, Wooldridge told the audience that Somalis at another panel discussion had said it was essential for relief groups to talk to the Islamist insurgents. These exiles also pointed out that relief agencies which dealt with al-Shabaab said they were easier to deal with than the weak Somali government, as it meant talking to one authority rather than having to negotiate with lots of different people in the transitional federal government.