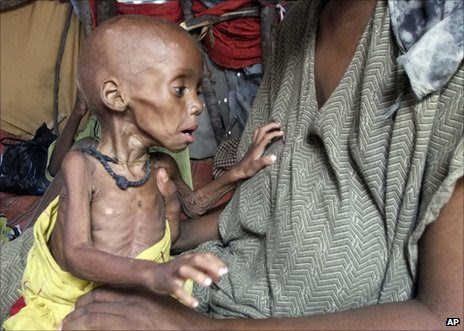 The World Bank has announced it is increasing funding for the drought in the Horn of Africa to nearly $2bn.
It says that the funds are needed to provide humanitarian assistance to millions of people.
The World Bank says countries across the region face one of the worst droughts in more than half a century.
The conditions, it says, are causing increasing malnutrition and food insecurity, and are displacing large numbers of people.
Over the coming years, the body will provide $1.8bn (£1.2bn) in assistance - nearly four times the amount originally pledged in July.
But it says there is still a billion-dollar shortfall to provide for the estimated 13 million people who are in need in Kenya, Ethiopia, Eritrea and Somalia.
Providing humanitarian assistance to Somalis remains the biggest challenge because of its continuing civil conflict and the soaring cost of food, the BBC's Marcus George reports from Washington.
The UN has estimated that 10,000 people have died across the region and the crisis could get worse in the coming weeks.

More on This Story