Often dubbed the false banana, the giant enset is a staple crop in certain parts of Ethiopia. As climate change brings increasingly frequent droughts, the plant's versatility and resilience could help fight hunger. 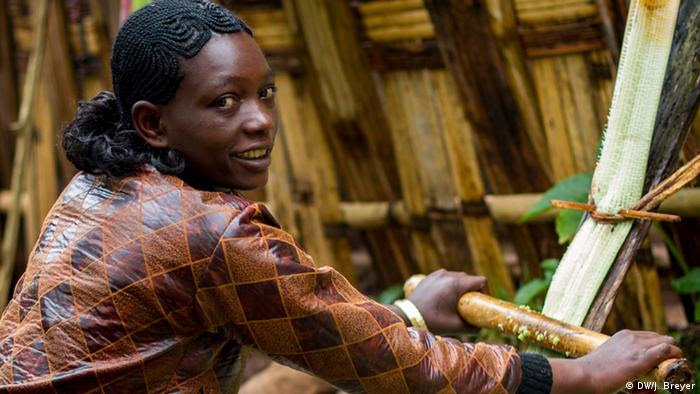 When 52-year-old Gebre Ynitso was a child in Ethiopia, he and his fellow villagers tended a towering plant with broad, lush green leaves. They harvested its roots and leaves for food and collected its fibers to weave into hats, sacks and even mattresses. No part of the plant went to waste.
"I would play hide-and-go seek in the dense enset plantation," said Ynitso, who also helped his parents transplant the enset, as the eye-catching crop is known. Ynitso also made toys out of its roots.
Endemic to Ethiopia, the plant has been cultivated there for more than 7,000 years. It's often dubbed the false banana because of its similarity to the banana tree. The enset can withstand droughts as well as heavy rains, making it ideal for cultivation in Ethiopia's climate.
Furthermore, climate change is causing increasingly harsher droughts in the southern highlands where the enset predominantly grows, which has led researchers to try and promote the old reliable crop to all Ethiopians as a resilient, famine food. 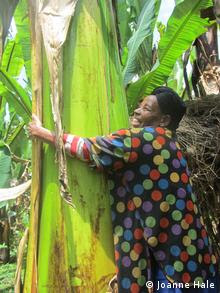 The enset takes four to five years to mature and can grow up to 6 meters tall
"One of the unique qualities of the enset is that it will always be around as a backup plan," said Ynitso, who now studies the plant as an associate professor at the Department of Social Anthropology at Addis Ababa University. "It's like money in the bank."
In most highland areas of southwest Ethiopia, where population density is high, the enset remains a popular crop and a staple food, said Ynitso. Yet in the midlands, where land scarcity is not an issue, attention has shifted to non-indigenous and soil depleting crops like maize for both commercial and domestic production. Younger people in particular often see it as old-fashioned.
A solid but underrated staple
Enset is a staple for 18 to 20 million people, or 20 percent of Ethiopia's population,says Joanna Hale, an international agricultural consultant formerly with aid organization USAID. It's often grown next to coffee, which thrives under the shade of its broad leaves. It seems like the swiss army knife of crops because of its many uses.
Apart from the fruit, which is inedible, much of the plant is eaten. Meat is often consumed with the corm, the robust root of the enset, which is boiled. Another popular dish, known as Kocho, is made from the powdered trunk and stalks and is fermented and eaten with a variety of breads. 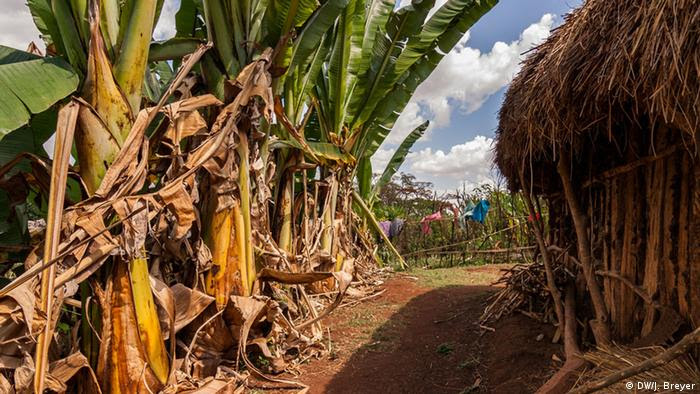 Enset is a back-up plan for many Ethiopians. When other crops wilter, the enset usually survives.
Bulla, a powdery by-product of squeezed kocho, is eaten as a porridge. Sometimes, Ethiopians also place chopped up corm in an earthen pit almost 2 meters deep and ferment it with yeast and starch. That way, it can last a number of years.
Cows and livestock also munch on the plant, providing protein in the form of meat for local families; the leaf litter that frequently falls from the huge plant improves soil fertility; and the enset has a small ecological footprint, producing 2.3 times more food per unit of land than cereal crops, says Hale.
"It's an underrated commodity, because it offers a lot for food security for low income groups," Hale told DW, pointing out that the enset region is one of the poorest and most densely populated in Ethiopia. 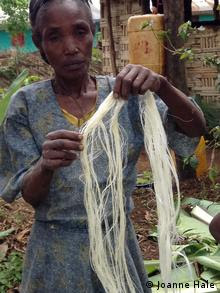 The fibres derived from the enset are commonly used to make sacks to carry coffee.
Population pressures are an issue across Ethiopia. The country's population has tripled to 94 million since 1933 and it is currently facing its worst drought in 30 years. Each year, 7.5 million people in the country go hungry and require food aid, according to the United Nations. As a result, opinions of the enset are changing once again.
"Enset has been under assault for many years now, but after the last food crisis [in 2011 and 2012] everybody's realizing they were wrong," Wolde Tadesse, a visiting researcher at the African Studies Department at Oxford University in the UK, told DW.
Those outside of the enset region viewed the plant as inferior to the crops they were used to and harder to cultivate than grain. But then "people who looked down at enset or never used it, started using enset to save their lives," he said.

Cultivating Greater Awareness of the Enset
In recent years, a slew of scientific, economic and cultural initiatives have cropped up aiming to cast the enset in a more modern light and emphasize its importance, says Tadesse, who grew up in the Gamo Highlands where enset is cultivated. He is now co-authoring a book on the crop. These initiatives hope to promote the enset in areas where it has fallen out of favor or never gained a foothold.
A new enset fiber factory is offering training in the best methods to dry enset fiber to ensure a high quality product. The fiber is now mostly used to make sacks to carry coffee. Arba Minch University in southern Ethiopia built an "Enset Park" to aid local farmers who are keen to stock up on seeds, or receive the materials needed to plant the crop. 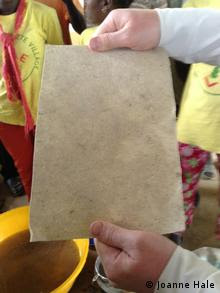 The fibres can even be used to make paper.
In a bid to raise enset's popularity as a foodstuff, Dilla University in Gadeo will host "Enset on Wheels" food carts, while food festivals have also sprouted up. Local farmers showed the crop's versatility at a recent festival in Gadeo by presenting 32 different enset meals.
To tap back into the enset's roots as a culturally important crop, it's a matter of reminding people of its still enduring role in many traditions. Enset is used as a means of measuring social status, says Shigeta Masayoshi, a professor at the Center for African Area Studies at Kyoto University, who's been studying the crop for 30 years.
"How many crops of enset a man has shows how well he's respected in the community," he said. And the enset remains a ritual crop, still used in ways both Ynitso and Tadesse remember growing up. It is the food given to mothers after they give birth, and women pound on its stems at funeral ceremonies.
"What's important about the enset is that it keeps the family alive," said Tadesse. "It's the backbone of the family and community."
Posted by Guihon at 12:51 AM