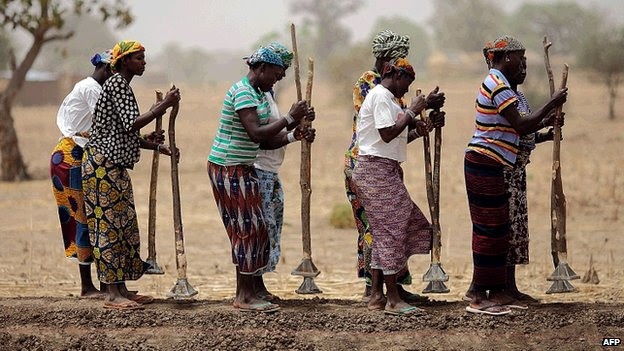 Major changes are needed in agriculture and food consumption around the world if future generations are to be adequately fed, a major report warns.
Farming must intensify sustainably, cut waste and reduce greenhouse gas emissions from farms, it says.
The Commission on Sustainable Agriculture and Climate Changespent more than a year assessing evidence from scientists and policymakers.
Its final report was released at the Planet Under Pressure conference.
The commission was chaired by Prof Sir John Beddington, the UK government's chief scientific adviser.
Continue reading the main story

Prof Sir John BeddingtonCommission chairman
"If you're going to generate enough food both to address the poverty of a billion people not getting enough food, with another billion [in the global population] in 13 years' time, you've got to massively increase agriculture," Sir John told BBC News.
"You can't do it using the same agricultural techniques we've used before, because that would seriously increase greenhouse gas emissions for the whole world, with climate change knock-ons."
Farming is probably responsible for about one-third of global greenhouse gas emissions, although the figure is hard to pin down as a large proportion comes from land clearance, for which emissions are notoriously difficult to measure.
Although there are regional variations, climate change is forecast to reduce crop yields overall - dramatically so in the case of South Asia, where studies suggest the wheat yield could halve in 50 years.
"We need to develop agriculture that is 'climate smart' - generating more output without the accompanying greenhouse gas emissions, either via the basic techniques of farming or from ploughing up grassland or cutting down rainforest," said Sir John.
The techniques needed in different regions vary according to what is appropriate, said Dr Christine Negra, who co-ordinated the commission's work.
"In places where using organic methods, for example, is appropriate or economically advantageous and produces good socio-economic and ecological outcomes, that's a great approach," she said.
"In places where, using GMOs, you can address food security challenges and socio-economic issues, those are the right approaches to use where they've been proven safe."
Waste matters

The commission's recommendations go a long way beyond farming methods, however.
It says the economic and policy framework around food production and consumption need to change to encourage sustainability, to raise output while minimising environmental impacts. 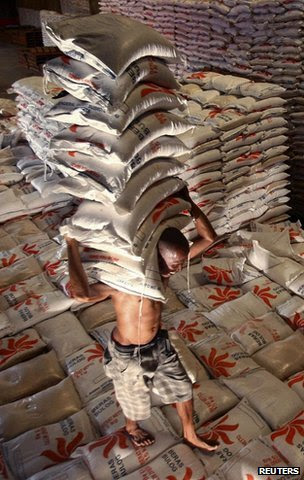 Policies enacted now will help future farmland bear the weight of a growing population's needs
Farmers need more investment and better information; governments need to put sustainable farming at the heart of national policies.
Prof Tekalign Mamo, who advises the Agriculture Ministry in Ethiopia, said models already existed for many of the transformations needed.
One, highlighted in the report, is Ethiopia's Productive Safety Net Programme, inaugurated in 2003 with the involvement of the government and international partners.
"One [aspect of it] is household asset building, so people don't deplete their resources in times of chronic food shortage," Prof Mamo told BBC News.
"Another is working on community assets such as building small-scale irrigation or watershed development; the communities own such activities and also allocate free labour, and the government provides incentives like food or cash for those participating.
"It has lifted about 1.3 million of the population from poverty and into food security, and at the same time they also conserved and rehabilitated the environment."
India's guarantee of employment in rural areas, Vietnam's progress with no-till rice farming (which reduces greenhouse gas emissions from soil), and moves to give women secure land ownership in five southern African countries are also highlighted in the report.
But it also recommends changes in developed nations - for example, around food waste.
"The less we waste food, the less food we have to produce, the less greenhouse gases are emitted," noted Dr Negra.
Before last December's UN climate conference in South Africa, the commissioners had advocated incorporating sustainable agriculture into the UN climate convention's discussions.
The eventual decision - to start talks on a "work programme" - is viewed by the commission as being weaker than it might have been.
The commission was established by the Consultative Group on International Agricultural Research (CGIAR), the global network of institutions working on food and poverty issues.
The Planet Under Pressure conference is a four-day gathering of academics, campaigners and business people in London designed to inform policymaking in the run-up to the Rio+20 summit in Brazil in June.
Posted by Guihon at 6:50 AM