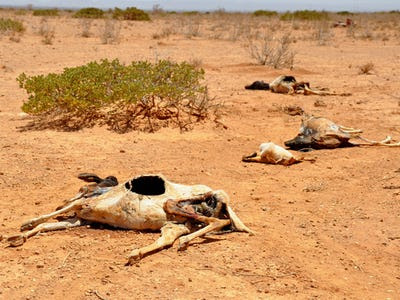 Dead livestock in Somaliland (Oxfam)
Germany's Africa policy chief Guenter Nooke said that the destructive drought in the Horn of Africa is a man-made "catastrophe."

According to Agence France-Presse, he blames Chinese land buy-ups there for greatly exacerbating the already tremendous humanitarian crisis and causing social conflicts and conditions that rob small farmers of their livlihoods.
"In the case of Ethiopia there is a suspicion that the large-scale land purchases by foreign companies, or states such as China which want to carry out industrial agriculture there, are very attractive for a small (African) elite," Nooke told the Frankfurter Rundscahu. "It would be of more use to the broader population if the government focused its efforts on building up its own farming system."
The Chinese foreign ministry denied Nooke's claims that they are buying up land They say that they have only set up 10 agricultural demonstration centers in Africa and sent almost 1,000 experts to educate local officials in food safety issues. The Chinese accuse Nooke of having ulterior motives.
China announced today that they will send about $14 million in aid to the areas that have been affected by drought.
Nooke acknowledges that Chinese investment in the area could have a positive effect of transferring Chinese agricultural expertise to the continent and providing an example of how exporting can be done well.
This could be a case of the kettle calling the pot black, however. European Union agricultural subsidies form an impenetrable barrier between European markets and African agricultural products. Nooke notes that the Germans support a phase out of these hefty subsidies that could give African farmers a chance to compete. At a time of famine, international competition is a moot point, however.
The drought and food crisis is affecting Somalia, Ethiopia, Djibouti, Kenya, and Uganda. At least 12 million people are in danger of starvation.

The Chinese aren't the only ones buying up land in Africa. Meet The Millionaires And Billionaires Suddenly Buying Tons Of Land In Africa >