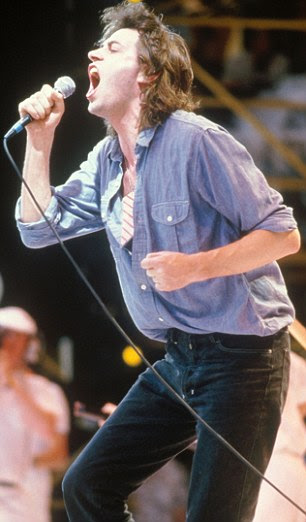 Influence: Bob Geldof wanted to feed the world, but decades on we can see Live Aid's negative impact
Like most people of my generation, I can still recall with utmost clarity the moment a bunch of denim-clad rockers strode on to the Wembley stage and struck up a song that never seemed more fitting: Rockin' All Over The World.
With those simple chords Status Quo launched Live Aid, supposedly the greatest concert the world had ever seen.
Like millions of people around the western world, I watched as Bono danced with an audience member, Paul McCartney crooned a Beatles classic and Freddie Mercury stole the show.
This was, after all, more than just a concert.
It was a collective act of global sympathy, the moment when some scruffy musicians showed all those stuffy politicians the true meaning of compassion.
One after another, those taking part claimed it was a day to change the world. And they were right — they did change the world.
The event was an amazing feat of organisation and an astonishing spectacle.
But tragically for an event born out of heartfelt concern for people suffering in a foreign land, it has had a negative impact. The more time passes, the more clearly we see the corrosive legacy of Live Aid.
Few should doubt the influence of that glorious summer day in 1985. We are governed by politicians who define themselves as the Live Aid generation. Just listen to the Prime Minister citing the concert for persuading him of the need to keep pumping aid into the developing world.
'I watched Live Aid,' he declared in a ringing defence of his controversial insistence that the overseas aid budget should be given an extra £4 billion over the next four years, despite spending cuts elsewhere.
David Cameron is not alone in lauding Live Aid; both his Labour predecessors watched the show and confessed to being influenced by it — Bob Geldof even called Tony Blair the 'Live Aid Prime Minister' — as did U.S. Presidents Bill Clinton and George Bush, plus scores of European leaders.
More importantly, so did all their electorates, who responded so generously when Bob Geldof pleaded for money.
But we can now see how this event has backfired, despite the best of intentions. It was founded on a misconception, promoted a patronising view of the world and encouraged the idea that soundbites, stunts and simplistic gestures can heal the most complex problems.
The result is the triumph of cheap emotionalism and celebrity politics — and, unfortunately, damage to the continent it sought to help. 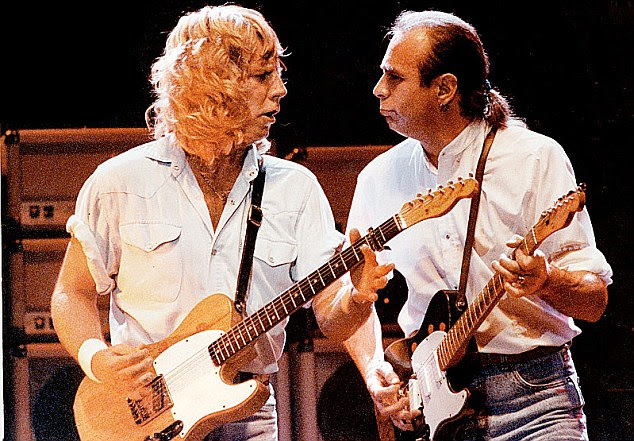 Opening chords: Rick Parfitt and Francis Rossi of Status Quo were the first act on stage at Live Aid
The signs were there from the start.
To begin with, there was the lack of African artists invited to perform at an event that urged the world not to ignore Africa.
There was room for mediocrities such as the Welsh singer Howard Jones and American soft-rocker Kenny Loggins, but not for any of the great names from a continent that pulsates with music. It is hard to envisage a bigger insult.
The impact was twofold.

The signs were there from the start. Kenny Loggins was invited - African artists were not

First, it was western acts such as Queen, U2 and Madonna who saw record sales soar into the stratosphere after a global promotion to an audience counted in billions.
And second, by denying African artists a platform, it demonstrated a mindset that the West knows best — that it is our voice that really counts, even when dealing with other people's problems.
Such superior attitudes have persistently dogged the aid lobby with consistently detrimental effects for people they purport to help.
This was compounded by Live8 two decades later, proving that nothing had been learnt.
Such an error could almost be forgiven once, but not twice.
Keith Richards, the Rolling Stones guitarist and a man who understands the history of music, rightly refused to play. 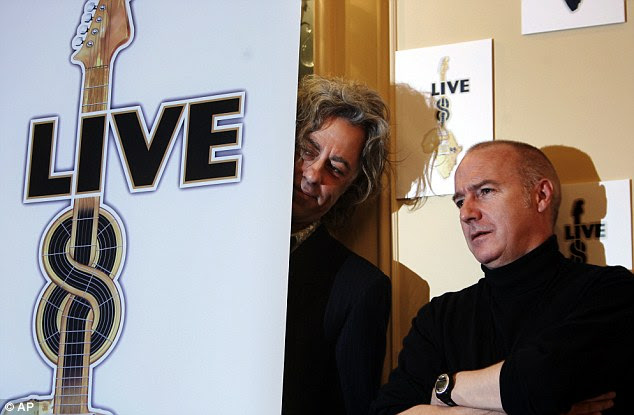 Not again? Geldof, left, and Midge Ure repeated their mistake with Live 8 but this time around people asked questions about its motives
'Who's this gratifying and where are the Africans?' he asked, before pointing out that Geldof seemed to be the person coming off best.
Another critic was Baaba Maal, Grammy-winning Senegalese singer and a widely-respected campaigner on education and health.
'If African artists aren't given a chance, how are they going to sell records and take the message back to Africa?' he asked, adding that Africans were tired of people using the name of their continent without understanding their needs.
So, what about the issue that sparked the event — the heart-wrenching pictures of those starving children in Ethiopia? 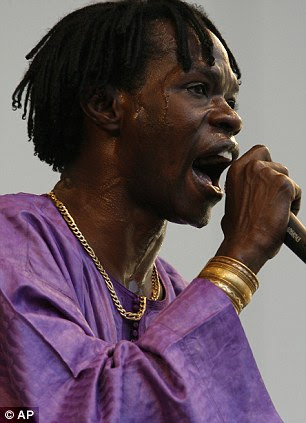 Not involved: Grammy-winning Senegalese artist Baaba Maal criticised Live 8 for lacking African artists
There was a terrible famine, indeed, but what we were not told was there was surplus food elsewhere in the country.
The problems were largely man-made, the legacy of civil war and brutal policies pursued by a ruthless Marxist government.
The programmes of forced resettlement and agricultural collectivisation were similar to those pursued by Stalin in Ukraine in the Thirties and the result was the same — death, destruction and mass hunger.
The Dutch author Linda Polman has detailed the Live Aid effect in Ethiopia.
First, thousands of Western aid workers and journalists flew into the country and were forced to change money into local currency at such high rates it fuelled the government's war machine.
Then food aid was used to tempt starving villagers into camps, with hundreds of thousands deported to state farms in the south. One in six of those forced to move died.
Only one charity — the fearless French organisation Medicins Sans Frontières — refused to go along with the regime after seeing 6,000 children die in a camp despite there being enough food.
All the others, many funded by Live Aid, averted their gaze and, if questioned, complained about the 'politicalisation' of aid.
Such are the moral complexities of the aid business.
Similar issues have been played out time and again, such as the period following the Rwandan genocide when Western charities ended up aiding some of the murderous gangs after they fled into the Democratic Republic of Congo.
But where is the appetite to examine such horrendously difficult issues in a world in which politicians are influenced by the glib idea that a pop concert can heal the globe's wounds? 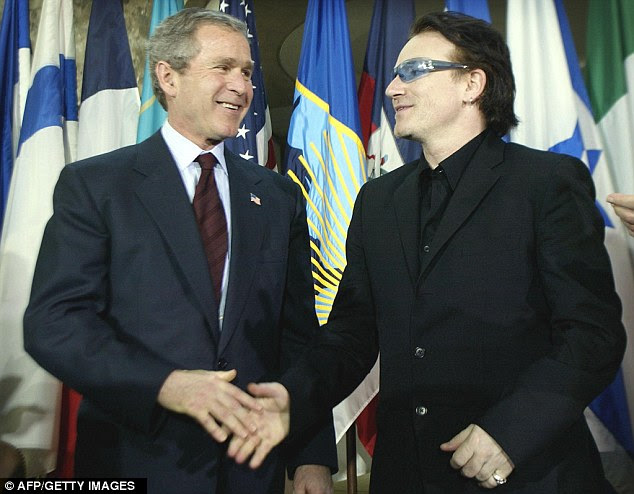 Stars such as Clooney, Angelina Jolie and Brad Pitt even sought the advice of Geldof and Bono before embarking on activism.
The fact that Bono is a tax dodger while exhorting countries to hand over more of their taxpayers' money does not seem to have diminished his influence in the corridors of power.
Politicians, of course, love rubbing shoulders with celebrities, hoping a little stardust rubs off on their grey suits, so charities have learned that enlisting stars can further their cause.
Meanwhile, charities have grown fat riding the wave of compassion sparked by Live Aid. And not just in this country.
Two decades ago there were just 46 foreign and 24 local charities operating in Ethiopia. Today it is estimated there are close to 5,000 such bodies working there, a near 200-fold increase — although Ethiopia remains one of the world's poorest countries.
The result is charities duplicating each other's work and impoverished countries wasting time and money they can ill-afford meeting the demands of their donors. 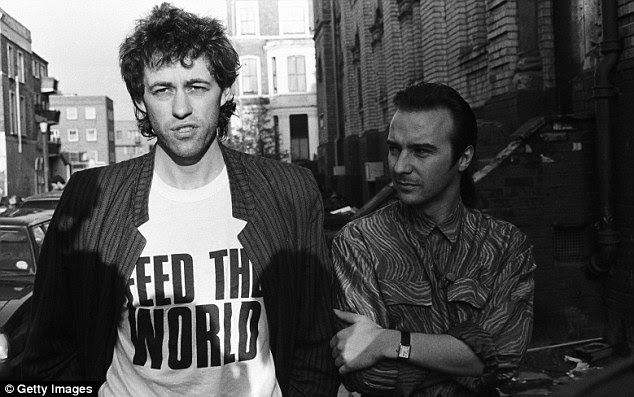 The legacy of Geldof and Midge Ure is that we are handing over more in aid each year, much of it spent by highly-dubious governments or channelled through the swelling ranks of charities
One study found the typical African country had to churn out an incredible 10,000 donor reports each year and host more than 1,000 visits by officials.
'It is difficult to describe how surreal the industry begins to feel after you have worked in Africa,' wrote Giles Bolton, former head of Britain's aid programme in Rwanda, in his book Aid And Other Dirty Business.
'It's certainly the least effective major public service funded by Western taxpayers.'
Bolton started his career fired up with missionary zeal, but his enthusiasm was dimmed by experience.

'When you start to feel that the whole structure within which you're working is incapable of achieving its aims, it's a hugely disillusioning moment,' he said.
Yet thanks to the Live Aid legacy we are handing over more and more in aid each year, much of it spent by highly-dubious governments or channelled through the swelling ranks of charities.
This explosive growth of charities also means fierce competition for funds as they seek to tap in to the public desire to help. But endless doom-laden images of famine, war, poverty and disease serve only to stereotype developing nations.
Good news, of course, does not help their cause.
'If you're not negative enough, you won't get funding,' said the head of one major charity in Nairobi, Kenya.
Presumably this is why the city's Kibera district, with an estimated 6,000 charities working there, was said to have one million people living in 'Africa's biggest slum' until a census found less than one-fifth of that number. This means one charity operating there for every 32 residents. 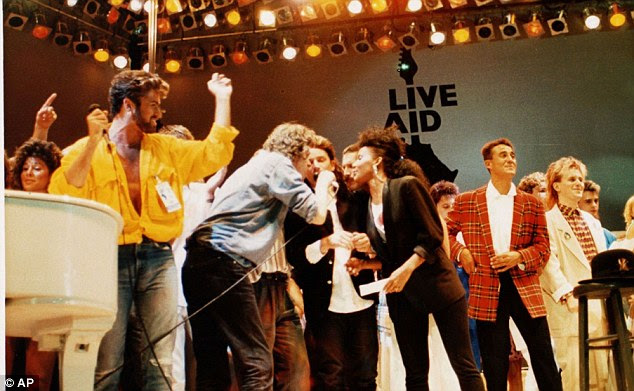 Misguided: The harsh truth is that for all those good intentions, these concerts have scarred a generation
In another telling incident, a former aid worker told me how she had been sent to investigate child exploitation among cocoa plantations in West Africa but found there was none.
Her report for one of the world's best-known charities was buried, however, and it still launched a campaign on the issue.
This constant drip-drip of negative imagery explains why a survey nearly two decades after Live Aid found the event still exerted such a powerful grip on the nation's psyche, with a majority of Britons associating the developing world with disaster and seeing people there as 'helpless victims'.
The proportion of people in sub-Saharan Africa affected by famine averaged less than three-tenths of one per cent between 1990 and 2005. But Britons are so ill-informed about Africa that one in five thinks it never rains there.
It gets worse. More than half think Timbuktu doesn't exist. Having been there, I can assure you it does, and that Mali, like Ethiopia, is one of the most magical places I have visited.
Just imagine how much more tourism — and trade — there would be for such countries without the long shadow cast by Live Aid.
Instead, too many people view Africa as one country, a festering swamp of torment and trouble, rather than the vibrant, diverse, resourceful and increasingly-successful continent that it is, home to several of the world's fastest-growing economies.
This is the tragic legacy of Live Aid.
The harsh truth is that for all those good intentions, these concerts have scarred a generation, distorted political priorities, dislocated our view of the world and disrupted attempts to provide genuine and productive help.
But they have been very good for a few western pop stars.