Children most at risk as drought decimates crops, herds

By ELIAS MESERET The Associated Press 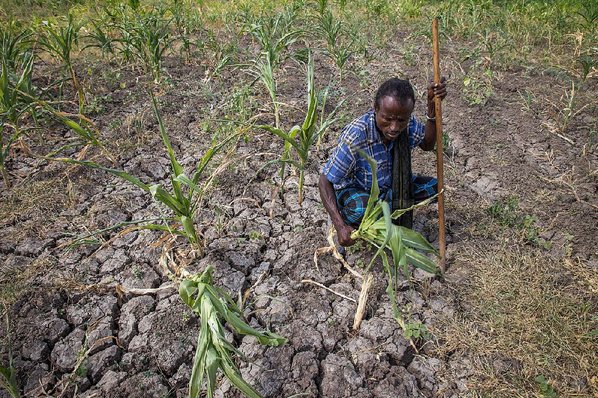 MULUGETA AYENE Credit: APA farmer shows his failed crop and dry, cracked soil in the Megenta area of Afar, Ethiopia. He said he had lost 100 percent of his crop.
DUBTI, Ethiopia -- Morbid thoughts linger on people's minds. The crops have failed and farm animals have been dying during a severe drought that has left Ethiopia appealing for international help to feed its people.

Mayrem Humeyisu talks about food supply in her neighborhood Tuesday in the rural village Dubti Woreda, Afar, Ethiopia. (By: MULUGETA AYENE) (Credit: AP)
U.N. Secretary-General Ban Ki-moon is set to visit some drought-stricken locations in Ethiopia on Sunday as the government and its humanitarian partners seek financial support.
In the Dubti area of Ethiopia's Afar region, one of the hardest-hit regions, the river is slowly drying up, leaving the normally hot and arid land even worse off. Some worry that children may start dying.
"My child is severely malnourished to the point that he could no more do breast-feeding," said Fatuma Hussein, a 30-year-old mother who has spent two months at an area clinic trying to get her child treated for malnutrition. Health officials said her child's condition was serious because the mother had no food left at home and had been letting her older children share the enriched food provided for her weak son.
"They are asking me to stay at the clinic until my son's condition improves," she said, "but I couldn't. If I stay here, the rest of my children will die. If Allah chooses to take his life, then let it be."
The Ethiopian government and aid agencies say El Nino conditions triggered drought in Ethiopia that has left more than 10 million people without a steady supply of food, and it is estimated that there will soon be at least 400,000 cases in the country of severe malnutrition among children under age 5. Only a third of the $1.2 billion needed for emergency food assistance has been raised.
"I have been here in the country for 19 years, and I have seen a lot of droughts, but I have never seen one as serious as this," said John Graham, director of operations in Ethiopia for Save the Children. "Some analysts think the situation is even more severe than the 1984 famine, with more people affected this time. But the situation is different. The then-government was a big part of the problem, whereas the current one has acknowledged the problem early and has put a lot of its own resources. That's why we are not witnessing people dying."
Ethiopia, once known for severe famines, has been trying to shake off the stereotypes of poverty and scarcity, investing millions of dollars in infrastructure and energy projects that highlight the government's ambition for modernity. Ethiopia's famine in the 1980s was so severe that it spawned the 1985 Live Aid concert to raise funds to fight it.
Although the country has since increased its capacity to feed itself, the threat of hunger and starvation remains.
The U.N. said this week that El Nino conditions reduced crop yields by 50 to 90 percent in Ethiopia. In the Afar region, health officials are talking about a catastrophe if aid does not arrive soon.
Kedir Abate, a medical director at the Megenta Clinic in Afar, said 20 to 30 severely malnourished children are brought to the facility each week, with the number of moderately malnourished children rising so fast he fears they could slip into the severely malnourished category soon.
"Both children and pregnant mothers are in a high-risk situation here. The past two months have been the most difficult," he said.
In December, the U.S. government announced it would give $88 million to help feed hungry people in areas experiencing drought, bringing the total amount of humanitarian aid provided to the country in 2015 to more than $435 million. Other countries like the U.K. have also given substantial sums.
Yet some say they have yet to receive aid, or enough of it.
"We are getting [nothing] or very little help in this area. I fear that people could start dying if aid doesn't come soon," Sheikh Hamed Dawud, deputy administrator of the Megenta area, said. "Animals are dying, and crops have failed. We have nothing left here."
Aid agencies say demand for aid delivery elsewhere in the world means there is less attention given to Ethiopia.
"There is a great deal of strain on the international humanitarian system and on Save the Children's humanitarian work, as well," Carolyn Miles, Save the Children's president, told the Associated Press by email, citing the Syria crisis as a primary example.
Posted by Guihon at 3:00 AM