The world’s biggest climatic weather phenomenon is easier to predict than many calamities. But it shows the importance of preparing for other disasters, too 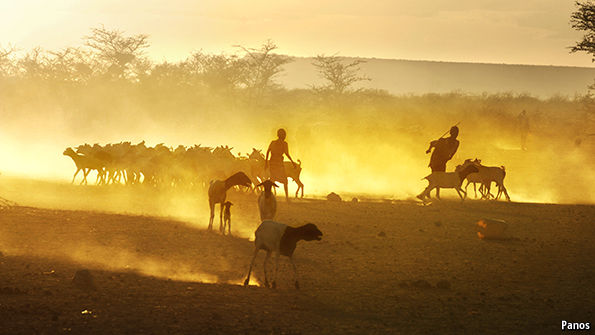 JUMPING a fence of prickly pears, Gumat Hussain, a local chief in the driest district of North Wollo, Ethiopia’s most drought-prone province, walks gloomily through his sorghum. “The crops have not produced grain. They are useless even for the animals,” he sighs. El Niño, the world’s largest climatic weather phenomenon, is keeping the rains away across swathes of Africa this year. Ethiopian officials say that the harvest is failing as completely as in a series of droughts that together killed more than 1m of the country’s people between 1965 and 1985, and made Ethiopia a byword for hopeless famine.
More than 8m Ethiopians are now going hungry. But a decade-old food-security programme is keeping the poorest from starvation—and showing how preparation for extreme weather events can mitigate the worst effects. In Africa’s largest social-protection scheme, 6m Ethiopians spend five days each month for the lean half of the year on public works such as digging water-holes for animals and building terraces for crops. In return they get 13kg of cereal and 4kg of pulses a month, or the cash equivalent. Another million who are unable to work get the handout, too.

In this section
Reprints
Related topics

El Niño was named after the Christ-child by Peruvian fishermen who noticed that the global weather pattern, which happens every two to seven years, cut their hauls around Christmas. El Niño sees warm water, collected over several years in the western tropical Pacific, slosh back eastwards when winds that normally blow westwards weaken, or sometimes reverse. America’s National Oceanic and Atmospheric Administration says this year’s Niño could be the strongest since records began in 1950.
The weather effects, both good and bad, are felt in many places (see map). Rich countries gain more from mighty Niños, on balance, than they lose. Their largely temperate climes mean that extra deaths during heatwaves are more than offset by fewer during cold snaps. A study from the IMF and Cambridge University found that a strong Niño in 1997-98 boosted America’s economy by $15 billion, partly because of higher agricultural yields: farmers in the Midwest gained from extra rain. The total rise in agricultural incomes in rich countries is greater than the fall in poor ones, says Solomon Hsiang of the University of California, Berkeley. One knock-on effect of El Niño—fewer Atlantic hurricanes—particularly benefits America. (Storm activity in the Pacific, by contrast, increases.)

But in Indonesia tinder-dry forests are in flames (see next article). A multi-year drought in south-east Brazil is intensifying. Though parched California may gain relief if El Niño sweeps away a “blocking” ridge of high pressure that has diverted winter storms for the past four years, heavy rains on bone-dry land are likely to cause surface flooding and mudslides. In any case, what the Golden State most needs is snow in the Sierras to replenish its water supplies—unlikely in the heat of a Niño year.
The most recent mighty Niño, in 1997-98, killed around 21,000 people and caused damage to infrastructure worth $36 billion around the globe. But such Niños come with months of warning, and so much is known about how they play out that governments can prepare—if they are sufficiently farsighted. According to the Overseas Development Institute (ODI), a British think-tank, and the Global Facility for Disaster Reduction and Recovery, however, just 12% of disaster-relief funding in the past two decades has gone on reducing risks in advance, rather than recovery and reconstruction afterwards. That is despite evidence that a dollar spent on risk-reduction saves at least two on mopping up.
Simple improvements to infrastructure, such as those carried out by Ethiopia’s public-works programme, can reduce the spread of disease. Better sewers make it less likely that heavy rain is followed by an outbreak of diarrhoea. Stronger bridges mean villages are less likely to be left without food and medicine after floods. According to a paper in 2011 by Mr Hsiang and co-authors, civil conflict is correlated with El Niño’s malign effects—and the poorer the country, the stronger the link. Though the relationship may not be causal, helping divided communities to prepare for disasters would at least lessen the risk that those disasters are followed by bloodshed.
Stitches in time
Mexico has already reaped the benefits of astute planning. Hurricane Patricia, which hit its coast last month, was the strongest Pacific hurricane to reach land on record, probably because El Niño added to its oomph. It caused far less harm than expected. That was partly because it moved too fast to whip up a big storm surge at sea, and also because it passed only through rural areas of south-western Mexico. But it was also thanks to government readiness. More than 3,000 homes were damaged in the state of Jalisco, but no one was killed because residents had been moved to shelters built for just such an emergency. Almost a quarter of Mexico’s territory is vulnerable to tropical cyclones and the country suffers from around 500 floods a year. Consequently, at least 0.4% of the federal budget is used for disaster preparation—a decent chunk in a country where government spending is low.
Disaster insurance can be too costly for poor governments and individuals: uncertain demand, weak regulation and local corruption all put insurers off, too. But by making the cost of risks explicit, insurance can encourage their mitigation. Collective schemes, such as the Caribbean Catastrophe Risk Insurance Facility, can make insurance more affordable, and disseminate information that helps governments, citizens and those running ports and airports to prepare. Since the poorest are least likely to recoup their losses from disasters linked to El Niño, minimising their losses needs to be the priority.
Posted by Guihon at 1:52 AM