Millions of people in the Horn of Africa are facing severe shortages of food as the worst drought in the region for six decades withers crops and kills livestock, as the BBC's world affairs correspondent Mike Wooldridge reports.
"I had a herd of 200 cows. I took them to Ethiopia when the drought started. All the cows I had taken there died and I came back without a single cow."
That story told by a resident of Wajir district in northern Kenya might not immediately appear to symbolise the humanitarian emergency increasingly gripping swathes of East Africa and the Horn of Africa - in the way that the rapidly growing number of acutely malnourished children trekking out of Somalia does.
But the distress being experienced by pastoralist communities across the affected region also goes a long way in explaining the severity of the current drought, its impact and the limits to the strategies people use to try to protect their livelihoods in such circumstances.
The Wajir cattle herder acted when he saw the grazing for his precious animals drying up.
But in the area of Ethiopia he took them to there turned out to be no greater chance of saving them. They started dropping dead, he says, one by one.
Aid officials estimate that up to half a million cattle have been lost in Ethiopia this year.
It often takes pastoralists at least two years to recover from a severe drought, particularly where it means building up a milking herd again.
This year's drought has hit hard when many people have not yet recovered from the last serious drought in 2009.
And the more marginalised the communities - and many of them are - the more likely people are to be pushed over the edge.
Food 'safety net'

On top of this, the cost of food is higher than at any time since the price crisis of three years ago.
This deeply alarming combination of factors has resulted in acute malnutrition affecting 35-40% of children under five in a lot of places, according to aid officials - twice the threshold that requires an emergency response.
In parts of southern Somalia - where the conflict between the Islamist extremist group al-Shabab and the Western-backed but weak government make aid operations so difficult - the real level of malnutrition is simply unknown.
One Nairobi-based aid official said: "In southern Somalia, it is not inappropriate to start worrying about it becoming a famine." 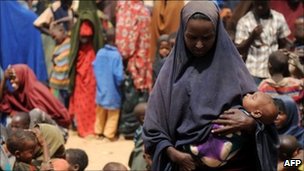 Thousands of Somalis have arrived at Kenya's Dadaab refugee camp in recent weeks
There have been many pledges over the years that lessons have been learnt from the humanitarian crises of the past - all the more relevant for this region of the world because of the history of famine in Ethiopia, Somalia and Sudan.
In Ethiopia, there is now a food "safety net" scheme assisting some eight million people vulnerable to chronic food shortages.
They are often supplied for food in return for work, and the idea is that many can also get access to micro-credit and to ways of helping them generate their own income.
The advantage of supplying food aid on a planned basis and not just once an emergency has struck, aid officials say, is that it can help prevent the need to sell off livestock or take children out of school.
And the hope is that it helps to build up the resilience of people in vulnerable communities.
Early warning

Britain's Department for International Development promised an increased focus on this after a recent review of its response to humanitarian emergencies.
But even in a year of good weather conditions, Ethiopia still needs food assistance over and above the safety net scheme.

New government figures for the requirement in the light of the deepening drought are expected imminently.
This crisis will be a test, too, of the increased effort that has been made in recent years in Ethiopia to monitor and manage malnutrition among children in the community to reduce the numbers ending up in feeding centres during crises.
Famine early warnings - of the kind we are seeing now in East Africa and the Horn of Africa - and projects designed to help people resist the impact of disasters are not new, but they have attracted increasing attention.
Once it seemed highly likely that a drought described as "the worst in 60 years" would mean that the number of people affected would be similarly record-breaking - as potentially would be the number of deaths.
Now the hope is that this link is being broken and, given a sufficiently timely and adequate response, while such an emergency will still be very serious, those do not have to be the consequences.
But across parched lands and in countless hard-pressed communities - and almost certainly in Somalia above all - that is the challenge now.
Posted by Guihon at 1:10 AM